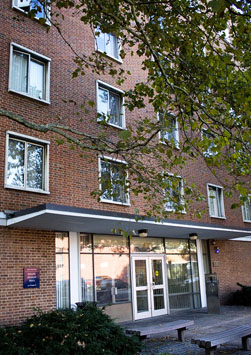 Built in 1959, Helen Hadley Hall was the first residence hall to accommodate female graduate students across the Graduate and Professional Schools. Prior to Helen Hadley, female students found boardinghouse situations, lived in Yale buildings reconverted into dormitories, or attended one of Yale’s professional schools that offered housing for women, such as the Divinity School’s Porter Hall, which no longer exists. The dorm was named after Helen Hadley, wife of the 15th president of Yale, who has been described as “a leader in helping women at Yale, whether students or wives of faculty.”

Originally located on the edge of campus, next door to the New Haven Home for the Aged and Destitute, what Professor Vincent Scully (BA 1940, MA 1947, Ph.D 1949) called the “late modernist design at its most banal” inspired its residents to compare it only half-jokingly to an institution or hotel. Today, many graduate students believe that the Hall was in fact some sort of institution before being transformed into a residence hall. In contrast to the environs here on Temple Street, when the women were moved into Morse College for one summer in the 1960s, they were 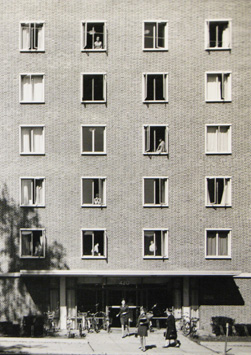 delighted to note how the beauty of the surroundings—the large, well lit rooms, and the magnificent views from the tower—were “extremely conducive to comfort and good study.”

Despite the less than desirable location, the 205 spots in HHH filled immediately and only a fraction stood empty by the end of the year as a result of “marriage, sickness, and withdrawals.” Because there was and is no dining hall here, the residents were expected to take their meals with their male counterparts at the Hall of Graduate Studies, a walk down dark streets and alongside the Grove Street Cemetery. Primarily through the efforts of Assistant to the Dean of the Graduate School Elga Wasserman (JD 1976), by the fall of 1966, a shuttle began to transport students, male and female, around campus after dark. When the women didn’t want to make the trek to HGS, they could prepare food in a tiny kitchenette provided on each floor of the dorm. Those kitchenettes proved a sore point in the fall of 1969 when HHH went coed: who would clean the kitchenettes on the men’s floors?

Early on, the residents voiced a need for “moral support” and women faculty at Yale established the Fellowship of Helen Hadley Hall, which met over catered dinners in the crowded snack bar. Over the decade of its existence, the Fellowship brought such speakers to campus as President of Radcliffe Mary Bunting, playwright Lillian Hellman, and Coretta Scott King (wife of Martin Luther King), who stayed in the guest suite at HHH.

This little plaque remains on the same pillar on which it was placed—in the common room of Helen Hadley Hall—in 1959. In 1942, the Dean of the Graduate School suggested some form of commemoration for his executive assistant, Ruth E. Feineman, whom he described as a “person of great enterprise” who “would not rest until commodious buildings had been set aside and properly equipped as living quarters for the women students in all the advanced schools.” The Secretary of the University responded with scorn: women students were generally considered an embarrassment at Yale and celebrating the half-century of one woman’s efforts toward housing female scholars was nowhere on the university’s agenda. 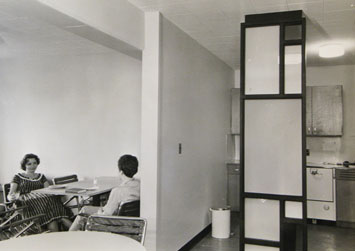 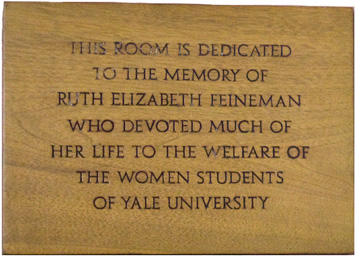 Although this residence hall was named after Helen Hadley, Ruth Feineman finally came into the recognition her boss thought she’d deserved for years when the central social hall was dedicated to her with a simple wooden plaque which reads: “This room is dedicated to the memory of Ruth Elizabeth Feineman who devoted much of her life to the welfare of the women students of Yale University.”