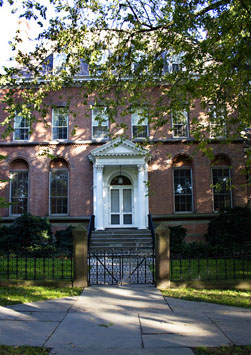 On the chilly Wednesday evening of November 6, 1968, from the steps of 43 Hillhouse Avenue, the home of Yale Presidents since 1937, President Kingman Brewster (BA 1941) and his wife Mary Louise Brewster (a Vassar graduate) greeted about 750 students—male and female—who had rallied behind the football marching band through campus in support of immediate coeducation.

Where did a spontaneous protest on an all-male campus find women participants?

Over 700 women from 22 colleges and universities on the East Coast had been invited by the male undergraduates to participate in Coed Week, the brainchild of students from Trumbull College. With the support of the faculty and administration, Yale men organized a weeklong coeducational experience on campus, prompting one local clergyman to predict it would be the “great screw-in.” Instead of focusing on sex, however, the Yalies determined to show the administration that bringing women onto campus could be a reality now and not sometime in the distant future. They crowded themselves into dorm rooms and classrooms to make room for the women who flooded in to attend classes, participate in school organizations, and engage in conversation with the men on the pros and cons of coeducation.

When the rally reached the President’s House that night, Brewster met the marchers, megaphone in hand, and announced that girls would be at Yale by 1972… to which the marchers shouted “Next fall! Next fall!” In fact, unknown to the students, two days earlier Brewster and the Corporation had voted to move forward with coeducation by 1970. Brewster would take his plans to the faculty for a vote within a week.

In the preceding years, the Brewster administration had appeared to vacillate between a genuine desire to welcome women to Yale and a need to keep them separate but equal. Many coordinate college options were considered: with a college already in New Haven and even with one on the West Coast. In 1966, Yale and Vassar began serious discussions about the possibility of moving Vassar to New Haven—specifically, selling the Poughkeepsie campus and moving to the Dixwell Avenue area—to create an educational situation that would mirror that of Radcliffe to Harvard. According to administrator Sam Chauncey (BA 1957), towards the end of the planning between Yale and Vassar, at a dinner hosted in the President’s House, the head of the Vassar delegation had all but turned Yale’s senior fellow in favor of coeducation. At the end of the dinner, just as everyone breathed a sigh of relief, she pulled a “tiny jeweled pipe” out of her purse, filled it with tobacco, and lit it up. That action apparently put the senior fellow off coeducation permanently. Regardless, Vassar eventually decided to stay in Poughkeepsie and bring men onto its own campus in the fall of 1969.

After the rejection by Vassar, the pressure for full coeducation came at Brewster from all sides. The revolutionary spirit of the decade had already vastly changed the face of Yale’s undergraduate population. Under Admissions Dean Inslee Clark (BA 1957), the “Yale Man” increasingly came from more diverse economic backgrounds, coeducational public schools, and minority groups. Even with such a diverse male student body, the media still touted Yale as the last bastion of elite maleness. In fact, Yale and Princeton vied for place as the last bastion and it may have been Princeton’s public announcement in the fall of 1968 that they would soon coeducate which prompted the Yale administration to plunge headfirst into full coeducation.

That night in November, the Yale Daily News described the Brewster who met the marchers as “congenial.” Garry Trudeau (BA 1970, MFA 1973), the then-undergraduate creator of the Doonesbury comics, often portrayed Brewster as a sympathetic listener in the face of campus activism. If publicly Brewster promised Yale’s alumni that the College would continue to graduate 1000 male leaders each year, privately he wrote in a 1970 letter that “the fault for the uproars on our campuses and streets do not lie with the young and the blacks. If it lies anywhere, it lies with us, with our generation.” According to Chauncey, Brewster was “convinced about coeducation from the beginning. His problem was how could he do it and not alienate various sectors in the community” such as portions of the faculty and students and many of the alumni.

Brewster broke his promise to maintain 1000 male leaders within a few years of coeducation, but by then the alumni rage had been diffused (after all, now alumni daughters could become Yalies). And, although some alumni admissions interviewers couldn’t seem to wrap their minds around letting women into Yale (one reported of one potential female Yalie that he wouldn’t want his son carrying her books), many more found their female interviewees even more impressive than the potential Yale men.

By 1974, Yale had adopted sex-blind admissions. By 1979, 10 years after coeducation, female enrollment reached 46 percent. And 1995 was the first year in which women outnumbered men in the freshman class at Yale by 19 students.