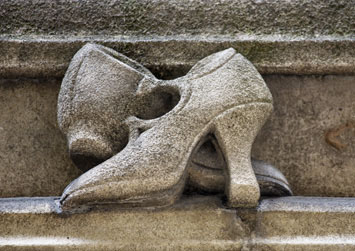 In her article Overlooking Women, Kathy M. Newman (Ph.D 1997) writes that she began to “discover a whole new population of Yale women in the buildings designed by James Gamble Rogers in the 1920s and 1930s – these were stone women designed by men, carved by men, and meant to be seen by men, but oddly different from the larger than life women in Sterling Library or Woolsey Hall. I got my first hint of these women in the eaves of Berkeley College, on the Elm Street side: set into the row of shoe icons and an image of shoe polish is what looks like, at first glance, a pair of women’s high heeled shoes, 1930s vintage. The shoe in front has a very high heel and a strap that comes around the front, but upon closer examination the shoe behind it looks almost like a man’s dress shoe, which gives the two shoes together the appearance of dancing. This may be one of the rare images in the buildings at Yale which not only suggest women, but women and men interacting.” 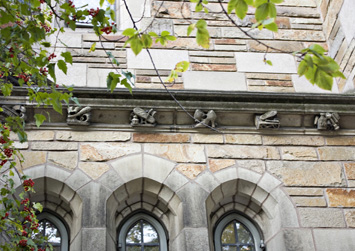 “If I looked hard enough, I could find images of woman at Yale that surprised my expectations. This became even more true for me when I found Cleopatra carved onto the Elm Street side of Berkeley College. At least, at first I thought she was Cleopatra: her corn-rowed hair is blunt-cut across her forehead, her neck and arms are adorned with coiled jewelry, and her breasts seem girded with a kind of armor. At her knee is a small, round, grass-thatched hut. But something disrupts the coherence of this mythical scene: she is wearing a pair of radio headphones around her ears. As I look more closely, I see a telephone above her left shoulder, the grass hut begins to look like a telephone switch house, and it becomes clear that she is holding a telephone cord in her right hand. Because her massive figure comes between the telephone and the switch house, it is not clear if she is about to connect the two, or if she has just ripped the cord out of its socket: her muscular arms and fierce expression suggest that she has the power to do both… 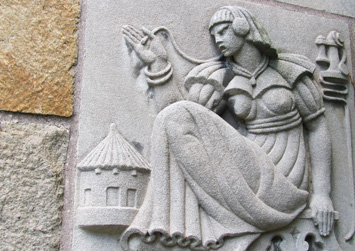 “Why sculptor Rene Chambellan inserted a burly, fierce, and goddess-like telephone operator into the picture is open to speculation: perhaps she signifies the fact that these Yale men spent a lot of time on the phone with mothers and girlfriends. On the other hand, perhaps Chambellan felt compelled to remind Yale men of the women who worked behind the scenes to connect them to the outside world: this Cleopatra might be the closest a Yale icon comes to offering a positive representation of a woman who stands simply for herself.”