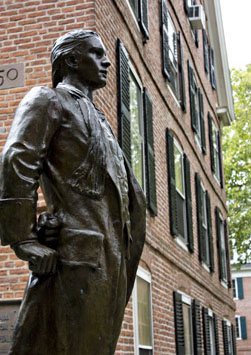 Connecticut Hall and the statue of Nathan Hale (BA 1773) which stands near it mark a number of events in the story of women at Yale. In Connecticut Hall in 1968, the faculty voted almost unanimously in favor of undergraduate coeducation—and, a decade later, in favor of making Women’s Studies an academic program. This spot also unites Yale’s most famous eighteenth century alumnus with the College’s first registered undergraduate female.

The day after registration in the fall of 1969, reporters besieged Amy Solomon in the halls of Vanderbilt. Did she know she’d been the first woman ever to register for Yale College? She didn’t. She explained that she had accidentally entered Connecticut Hall through the wrong door, making her the first to arrive. 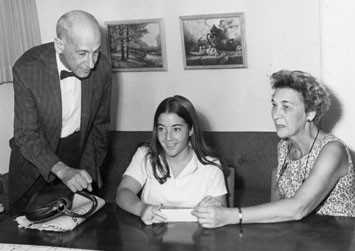 The media fascination with Yale’s first coed spurred Yale’s own fascination with her. Best known as a spy who was captured and executed by the British during the Revolutionary War, Nathan Hale is perhaps not as well known for successfully arguing during his commencement debates in favor of equal education for women. Among other items placed in a time capsule in the base of the statue is the famous staged photograph of Solomon re-registering—because nobody had been there to record the moment.