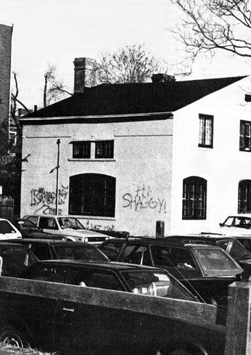 In the parking lot behind the Slifka Center once stood Corbey Court—a “small pale yellow brick cube of a building”—which became the first official home to the Women’s Studies Program. Professor Margaret Homans (BA 1974, Ph.D 1978) describes the building as undignified, shabby, homelike and cozy. She tells about teaching there: “I remember teaching a seminar in the back of the two rooms which was quite small and had the fireplace and it felt like having a dinner party rather than teaching a class.”

Students began requesting courses about women in the first year of coeducation. Elga Wasserman (JD 1976), then Special Assistant to the President on the Education of Women, tells of a student who came to her office in tears. The student had asked a male history professor to consider teaching a course on women’s history. He told her “that would be like teaching a class on the history of dogs.”

After it was recognized as an academic program in 1980, Women’s Studies remained in residence at Corbey Court for more than a decade. In the early 1990s, the program’s professors eagerly donned hard hats to take a look at the renovated third floor of William L. Harkness Hall, where Women’s Studies became Women’s and Gender Studies in 1998, and then Women’s, Gender, and Sexuality Studies in 2004.