Cross Campus and the GLAD Dances 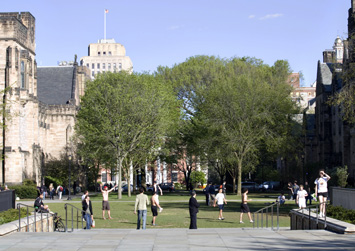 On Cross Campus in April of 1982, self-proclaimed “baby dyke” Maia Ettinger (BA 1983) gave what Yale alumnus and professor of gay history George Chauncey (Ph.D 1989) now calls an “electrifying speech” about the homophobia students then faced on campus. Maia spoke at the rally which, along with a dance, was the culminating event for GLAD, or Gay and Lesbian Awareness Days, which had been organized by the Gay and Lesbian Co-op. Although there is evidence that gay students had been at Yale for centuries, the progressive movements of the 1970s, particularly lesbian feminism with its “rich institutional life and political theory,” allowed both lesbian and gay students not only to come out to their peers on campus but also to organize for more widespread acceptance. A major victory of the Gay and Lesbian Coop occurred in 1986 when the non-discrimination policy at Yale was changed to include sexual orientation. 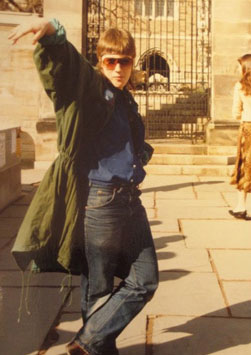 When asked recently if she felt her work at Yale had changed the community, Ettinger responded: “Oh, hell yeah. I felt like we were leaving, and gay people could be there. I mean, it was night and day from when we got there to when I left.”

By the mid-1980s, the GLAD dances had become extremely popular, attracting up to 1000 students, gay and straight, to boogie on Cross Campus in support of lesbian and gay awareness. Cross Campus continues to be a place for various groups to gain visibility and some version of GLAD has happened every April for the last thirty years.