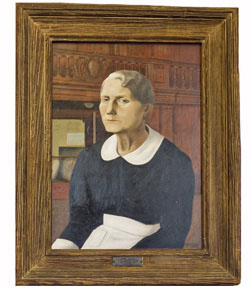 “Faithful and beloved,” Anne Allen served in the Davenport Dining Hall from the inception of that college through 1950. Prior to the opening of residential colleges, only men had been allowed to serve in Yale’s dining halls—and it might have continued that way if Harvard hadn’t set the example and allowed women in first. Yale historian George Wilson Pierson writes that, when deciding who would staff the dining halls, the administration first considered using the “faithful colored retainers who had for so many years added friendly warmth to the fraternities and societies; but Harvard used waitresses with no untoward results, and after some hesitation it was decided to follow suit, thus introducing women into these quasi-monastic communities by the kitchen door.” Perhaps not coincidentally, Allen’s portrait, a gift of the Master and Fellows, hangs in the dining hall near the servery. 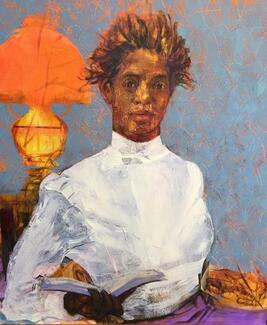 The portrait of Otelia Cromwell (1874-1972, PhD 1926), tucked between Davenport College’s dining hall and common room was painted by Yale graduate Kenturah Davis (MFA 2018). Born in Washington, D.C., Cromwell earned her Ph.D. in English, becoming the first African American woman to receive a PhD from Yale. A lifelong activist, Cromwell, taught in D.C. public schools for over a decade, and in 1932 served alongside W.E.B. DuBois as the only woman on the board of directors of The Encyclopedia of the Negro.