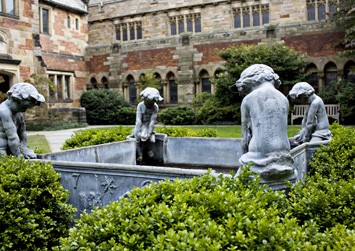 When Beatrix Jones was still quite young, her uncle declared: “Let her be a gardener, or, for that matter, anything she wants to be. What she wishes to do will be well done.” After establishing herself as a landscape gardener, Jones met and married Yale Professor of History Max Farrand, who introduced her to Yale’s benefactor Edward Harkness (BA 1897), who insisted that Yale put her to work. In 1923, Beatrix Farrand took the first ever salaried position of Consulting Landscape Gardener at Yale, hired a staff, started a nursery, and proceeded to design the landscapes for at least 16 Yale buildings over the next 22 years. This was the first time that the University had employed a woman in such a position of authority. Yale immediately noticed the difference in the landscape, some even stating that all previous landscape operations now seemed “haphazard and unplanned.”

When Sterling Memorial Library was built in the second half of the 1920s, Farrand designed the landscape for this courtyard with its centerpiece fountain. She once wrote of her designs at educational institutions: “The primary object is to make the outward appearance and surroundings of the buildings an education for those who work and study in them. Surely the training of the eye to daily settings both beautiful and fit is as large a part of education as is the regular academic routine.” Although architect James Gamble Rogers (the designer of Sterling Memorial Library as well as many other Yale buildings constructed around the same time period) may have agreed with her in theory—and the moat-like structures around the colleges designed by Rogers were done at the suggestion of Farrand—he sometimes did not agree with her methods. In a 1931 letter to the University, he complained about how the centerpieces of her landscapes (the fountain here, low bushes in Davenport and Pierson courtyards) interrupted the intended spaciousness of his courtyards. Further, he found the plantings near the doorways to create a “flippant” and “discordant note” in his architecture.

The fountain here, carefully designed by Farrand with figures which stare solemnly into the pool, provides a focal point for contemplation in a space that manages to balance the solemn aura of the library with the more “discordant” possibilities of the out of doors. The Farrand Courtyard with its centerpiece fountain showcases one of her extant designs at Yale. Another can be seen in the Silliman College Courtyard.