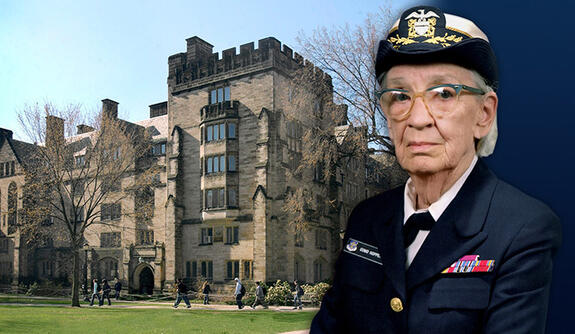 In July 2017, Calhoun College, one of Yale’s fourteen residential colleges, was officially rededicated and renamed for Grace Murray Hopper (MA 1930, PhD 1934), the pioneering computer scientist and mathematician. Originally named after ardent slavery defender and secessionist John C. Calhoun (1782-1850; BA 1804), Calhoun College was a focus of controversy. The legacy of Calhoun’s racist ideologies rankled many of Yale’s faculty, staff, students, and alumni. After extensive discussion and protest, President Peter Salovey appointed John Witt (BA 1994, JD 1999, PhD 2000), the Allen H. Duffy Class of 1960 Professor of Law and professor of history to chair the Committee to Establish Principles on Renaming. The committee studied similar controversies at other institutions, and the history of the naming and renaming of Yale buildings, and ultimately announced a set of principles. These were applied to the case of Calhoun by a separate committee, leading to the decision to rename the college.

Part of the renaming involved the replacement of several stained glass windows in the college depicting John Calhoun as a slaveholder, including one of an enslaved man kneeling before him in shackles. Another window, showing several enslaved people in shackles, was destroyed by a dining hall employee, who was suspended for his action but subsequently allowed to return to work.

With input from the larger Yale Community, the Yale Board of Trustees elected to rename the college for Grace Murray Hopper in February 2017. Hopper taught mathematics at Vassar College, and went on to enlist in the U.S. Navy where she became one of the first three programmers of the IBM Automatic Sequence Controlled Calculator (also known as MARK I), the first electromechanical computer in the United States. She laid the groundwork for automatic programming and introduced the idea of writing code in words rather than symbols. Her English language compiler ultimately helped make computers more accessible to those without training in engineering and math. In 1973, she became the first woman and the first American to become a Distinguished Fellow of the British Computer Society and in 1991 was awarded the National Medal of Technology by President George Bush. Her lifelong commitment and visionary innovations resonate in the male-dominated field of computer science and mathematics.

‹ Cross Campus and the GLAD Dances up Grove Street Cemetery ›