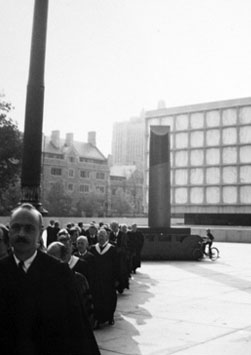 With its “gray and white, cubit, disciplined,” hard surfaces, this quad has been described as “basically paternal” and “the power center of the university”—standing in contrast to what some consider the more “embracing and maternal” space of Cross Campus, with its green and trees and warm brown stones. Although this plaza is visually dominated by memorials to the men who died in World War I, during the first year of coeducation, Claes Oldenburg’s ironic monumental sculpture, Lipstick (Ascending) on Caterpillar Tracks, took center stage here for a little under a year—from May 15, 1969 through March of 1970. Today, we must imagine the Lipstick rising just to the left of Woodbridge Hall—or failing to rise, as the case may be.

One account describes the event:
Shortly after noon, a ragtag group entered the campus with a small caravan of trucks and trailers and unloaded the 24-foot, 3500 pound sculpture of a lipstick standing vertically on a tank chassis. As a crowd of students assembled, members of the [Colossal Keepsake] Corporation—[the donors]—struggled to inflate the phallic form of the Lipstick’s orange vinyl tip, but the balloon that filled it was small and leaky, and the shriveled tube slumped over the sculpture’s vertical aluminum column. A week later, the flattened tip was replaced with a sturdy aluminum replica, and the monument remained in the courtyard for the next ten months, where it was intended to serve as a podium for the leaders of future protests. 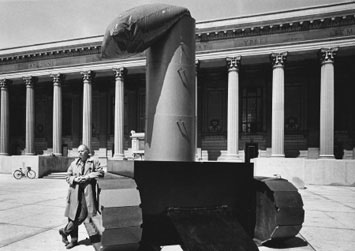 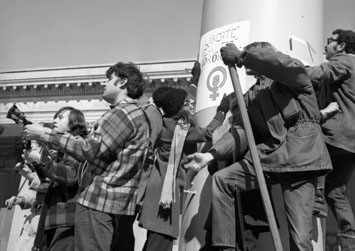 Before a Women’s Table or Women’s Center existed on campus,Lipstick (Ascending) on Caterpillar Tracks greeted the first female undergraduates in their first months at Yale. Although this “bisexual” sculpture was intended to serve as a podium for anti-war protests, after one too many spray paintings, Oldenburg himself had it removed. Today, the sculpture stands in the courtyard of Morse College. You can usually see it if you stand in front of Payne Whitney Gymnasium and look across the street towards Morse and Stiles. Behind the dumpsters stands a wrought-iron fence and behind that fence, the Lipstick can be seen stretching up beside Morse.

Here, in the first photograph, Oldenburg stands next to his sculpture. In the second, the Corporation and Officers of the University march past in procession for the 1969 Freshman Address. In the third, students rally while one woman posts a sign which pictures the female symbol with a fist in the center and reads: Liberté / Egalité / Sororité.