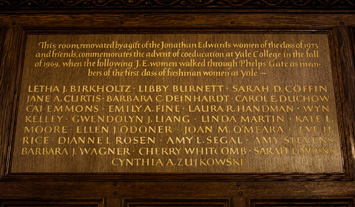 This plaque hangs in the Junior Common room of Jonathan Edwards (JE) College. In 2007-2008, this room was renovated through a gift from the women of the JE class of 1973, the first class of freshwomen at Yale. Spearheaded by Joan O’Meara Winant and Eve Rice, the fundraising campaign primarily targeted the women of JE ’73 and proved so successful that they were able to fund this beautiful commemorative wall carving, carved by John Nash, the Master Carver at Oxford University in England, that reads: “This room, renovated by a gift of the Jonathan Edwards women of the class of 1973 and friends, commemorates the advent of coeducation at Yale College in the fall of 1969, when the following JE women walked through Phelps Gate as members of the first class of freshman women at Yale.” It includes the names of all 23 women in the class of JE ’73.

What drove Joan and Eve to dedicate a space to commemorate women at Yale?

When fundraising for her 35th class reunion, Joan realized that, although JE had excellent alumnae representation, something was missing. When Eve and some of the other alumnae saw an article in the Yale Daily News that mis-identified the date of coeducation, they realized they were at risk of losing a history of women at Yale and, by extension, of women in the world. Joan and Eve took responsibility for commemorating a small part of this history. As Eve says: “Yale went coed because these women decided to come to Yale. Every woman who came to Yale gave up a sure thing somewhere else to be here.”

Maybe this list of names will inspire the people who pass through here to think about what these particular women did and about the first years of coeducation at Yale. Joan tells a story about the fall of 1968, her senior year at the Academy of Mount St. Ursula, an all-girls Catholic School in the Bronx. She remembers some boys from Fordham Prep, their “brother” school, boasting that the girls literally couldn’t get into the great colleges because none accepted women. A few days later, Yale announced they would accept a limited number of women for the next fall. Joan applied, was accepted, and turned her back on the college plans she’d already made. She entered Yale that fall.

Joan and Eve have great memories of their years at Yale, memories of challenging gender boundaries, sometimes even in humorous ways: once the women of JE delivered a handmade crocheted bathing suit to a particularly handsome and “full-of-himself” junior. Apparently, he hadn’t invited any lowly freshwomen to use the pool the cool guys had set up atop the JE Buttery to celebrate the arrival of spring. Overall though, they remember that, where pursuing equality for women was concerned, Yale was at least “better than the world out there”—the University was at least “trying to do something.” Perhaps with the help of this plaque and space dedicated to women, Yale will continue to remember the women who entered with that first freshman class, the women who continue to shape the meanings and structures of coeducation at Yale.