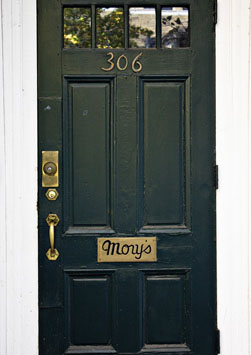 On the sidewalk in front of Mory’s, for a full five years after Yale College co-educated in 1969, graduate students, undergraduates, faculty, and community members of both sexes picketed this private club that exclusively served the men of the Yale community. Yale’s first women’s a cappella organization, the New Blue, even sang outside Mory’s in protest.

Mory’s hadn’t begun as a strictly male enclave. When a few Yale rowers first discovered the bar in 1863, they were entertained by owners Frank and Jane Moriarty. Jane ran the bar for nine years after her husband’s death. Her 1885 obituary claimed that no member of the faculty was as widely known and beloved as “The Widow.” 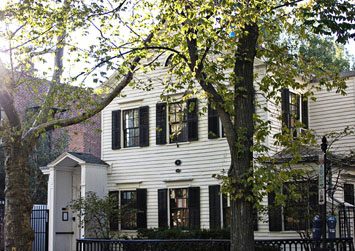 When female graduate students arrived on campus in 1892, however, they were not allowed through the doors. In 1909, the Whiffenpoofs, the oldest collegiate a cappella group in the country, commenced a weekly meeting at Mory’s. By 1912, when the pub converted to a Yale-membership-only club and moved to its current location on York Street, Mory’s had been immortalized in the first lines of the Whiffenpoof Song which begins, “To the tables down at Mory’s.”

In response to coeducation, the Board of Governors added the word “male” to the membership requirements. Women were allowed in only as guests, only at dinnertime, and only via the back stairs to private rooms. Finally realizing the impact of Mory’s on the Yale community (the restaurant played host to men-only faculty meetings, dinners with visiting speakers, and even law firm recruitment parties), President Brewster declared that official university business no longer be held at Mory’s. Departments took sides, some championing the motto: “Keep Mory’s Mory’s.” 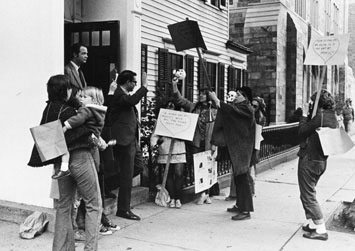 Finally, in April of 1974, after three years of a stripped liquor license and ruinous legal fees, Mory’s accepted all 160 membership applications, 80 of them female. If you walked into Mory’s anytime in the last 40 years or so, you would see photographs of women’s sports teams sharing wall space equally with those of the men’s, and you might hear women’s a cappella groups singing inside any night of the week.