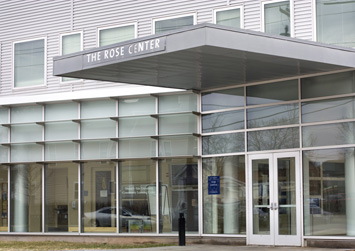 On December 22, 1783, eleven year old Lucinda Foot was deemed “well fitted to be admitted to the Freshman Class” after Yale President Ezra Stiles put her through a typical entrance examination. Although her age would not have been a deterrent—at the time, the youngest Yalies were often in their early teens—her gender prohibited Foot from attending.

Nearly two centuries later, when transfer student Deborah Rose (B.A. 1972, M.Ph. 1977, Ph.D. 1989) was accepted into the newly co-educated Yale, Rose sent her parents a telegram: “Female at Yale.” Coming from a family of Yale graduates, she knew they would understand the message. Rose’s father, who helped establish the Association of Yale Alumni, was “strongly for coeducation.” Like him, Rose chose Jonathan Edwards College—where father and daughter were later Fellows together.

Dedicated in 2006—and the brainchild of the first Rose female Yalie—the Rose Center was made possible through the joined efforts of Rose and her mother—who liked her daughter’s bold style. Because Rose felt that the police station should have a community component and neighborhood computer access, the Rose Center houses the state-of-the-art Yale Police Department and the Dixwell-Yale University Community Learning Center. The Rose Center reflects Rose’s long history with Yale, where she has always been involved with the Dwight Hall Summer Program and where she got an inside view of what she calls the ‘dump’ that was once the police headquarters—an old Victorian house with sloping floors, cramped office space, and cruisers parked in the mud.

Through the glass wall which runs along the front of the Rose Center, passersby can view the activity in the community center, the police dispatch room, and the office of Yale Police Captain and community liaison, Barbara Morton. Captain Morton has spent 34 years with the Yale Police working to build relationships with girls and women in the community. Perhaps, through the Rose Center—where, Rose hopes, “the university and the city have forged a relationship that is synergistic for everybody”—even more girls and women will feel empowered to make a mark at Yale—maybe even some as young as 11 years old.