The first female Dean of Yale College Mary Miller (Ph.D 1981), Sterling Professor of History of Art, served as Master of Saybrook for nine years. This portrait depicts her with her husband, Professor of Japanese Studies, Edward Kamens (BA 1974, Ph.D 1982), and their cat, Rainbow.

For almost three decades (1946-1975), Alison Peake Henning served the Saybrook community alongside her husband, Saybrook Master Basil Duke Henning (BA 1932, Ph.D 1937). In 1979, the Hennings received the Yale Medal for service to the university. While an undergraduate at Smith College, Henning founded the Smiffenpoofs. At Yale, she became an honorary member of both the Whiffenpoofs and of the Yale Glee Club.

The youngest daughter of Elijah Woodward of Watertown, Connecticut, Dotha Woodward married John Hancock De Forest in 1811. Together, they raised four sons. After her brother-in-law, David C. De Forest, endowed a scholarship for his descendants to be able to attend the university, at least two of her nephews matriculated at Yale. Her in-laws also established two prizes which still exist today: the David C. De Forest Prize in English Oration (established in 1823) and the De Forest Prize in Mathematics, established in 1855 by her nephew John (BA 1826). Yale also owns the portraits of David C. De Forest and his wife Julia Wooster De Forest, a “famous beauty.” Apparently, David De Forest requested that the artist paint him to look six or eight years younger than he was, so that he would “appear to children and grandchildren more suitably matched as to age with their mother and grandmother.”

The portrait of Anna M. Harkness hangs over the fireplace in the dining hall. Harkness was responsible for both the Harkness Memorial Tower and the Memorial Quadrangle. Her son, Edward S. Harkness (BA 1897), financed Yale’s residential colleges.

In 1829, Jane Griswold Lanman, daughter of the Hon. James Lanman (BA 1788), married Dr. Daniel Tyler Coit (BA 1825 MA 1828). They lived in Boston. After her death, Jane Coit was buried in Norwich, Connecticut, by the side of her only child, a daughter who had died very young. Upon his own death, Daniel T. Coit left $100,000 to the President and Fellows of Yale College. Painted by Boston artist Chester Harding, the portrait depicts Jane Coit at almost thirty years old. 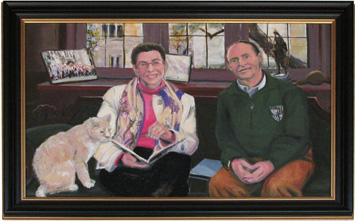 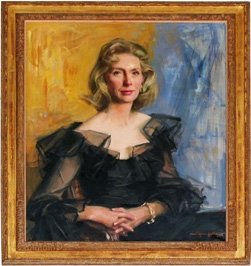 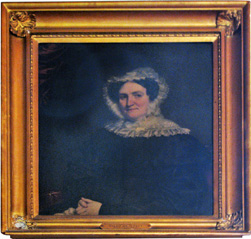