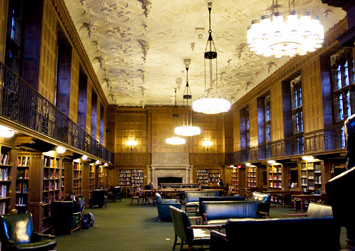 “By vote of the University Library Committee, effective July 1, 1963, Linonia and Brothers (L&B) Library will be open to the ladies. This decision changes a long-established policy restricting L&B to men only and has been made in recognition of the growing status of women in the Graduate School at Yale.”

Although women had been students in the professional schools since 1869 and at the graduate school since 1892, the Linonia and Brothers Library had been off-limits to women in every capacity since its creation in the late 1920s. In 1948, a time when a little over half of the library’s staff were women, the Library Rules and Regulations declared the L&B Room “a ‘stag’ room… closed to members of the opposite sex.” Women could withdraw books using call slips at the desk, but “that is their only privilege.”

A 1939 description of the room stated that it was “designed to stimulate leisurely browsing and reading for pleasure in an atmosphere of informal comfort.” Smoking was permitted (indeed, the Librarians had to remind the young men to use the many ash trays provided instead of constantly ashing onto the floor). And L&B was open not only to undergraduates but also to “all male members of the faculties, fellows, and male students of the Graduate and Professional Schools.”

In the spring of 1963, female graduate students picketed to protest the exclusion. When the young men returned to the newly desegregated room that fall, hundreds signed a petition condemning the “evil integration.” One junior, completely disgusted with the women, described them as sitting “in those big leather chairs in an absolutely undignified way.” The protests, however, were soon drowned out by much larger campus movements favoring the coeducation of Yale College and nationwide racial desegregation.

In an interview from the early 1990s, Professor Arthur Galston describes being appointed to the Library Committee and working to integrate the L&B Room. When he and his wife first arrived at Yale in the 1950s, she went immediately to the library, settled comfortably into one of the armchairs with a book, and “five minutes later was asked to leave.” Galston reports that his wife was “furious.” After the committee voted to allow the women access, “several Old Blues” became very indignant, one even declaring that the couches and easy chairs should be replaced with straight-backed wood furniture. Galston says this gentleman “was seeing carnality intrude at L&B.” (And, indeed, the British poet and librarian Philip Larkin declares in his poem Annus Mirabilis that “Sexual intercourse began / In nineteen sixty-three / (which was rather late for me) - / Between the end of the Chatterley ban / And the Beatles’ first LP.”

Despite the fears of some members of the Library Committee, the room retained its furnishings—which have been described as those of a “gentlemen’s club”—“leather divans, ottomans, thick rugs, and smoking stands.” Indeed, this room has inspired library design across the country—and also closer to home in the newly renovated space in the basement between Sterling and Bass Libraries.