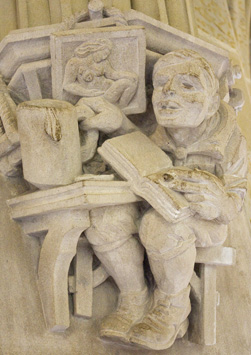 For the 25th anniversary of coeducation, graduate student Kathy M. Newman (Ph.D 1997) wrote an article about iconography on campus which depicts women. About this particular relief, she wrote: “I found strange comfort in this framed woman when I passed her in the library: she was evidence that if I looked hard enough, I could find images of women at Yale that surprised my expectations.”

In this relief, a man “sits reading at a table with a cigar in one hand and a beer in the other. Just above his beer is a nude woman in a frame. Like the student, she is anything but two-dimensional—her head, arms, breast, and legs bulge out from the plane of the frame, reminiscent of a Matisse sculpture. At first glance this scene confirms the convention with which we are all familiar in representations of men and women: men act, women appear. He is supposed to be reading, drinking and smoking while she is framed, presumably, for his looking pleasure. But in this tableau it is the man who stares straight ahead, with a blank expression on his face. He is not looking down at the book, nor is he looking at her. Her line of site, on the other hand, is directed downward: she is the one who is straining to read the book.” 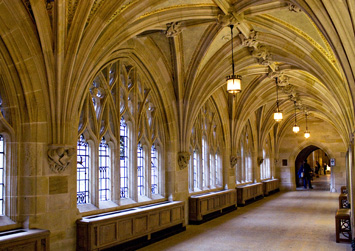 Newman discovered that this relief, along with other “oddly different” depictions of women found in the buildings designed by James Gamble Rogers (BA 1889) in the 1920s and 30s, was designed by a sculptor named Rene Chambellan, who, for unknown reasons, created what Newman considered “a whole new population of Yale women” that contrasts directly with the more traditionally allegorical depictions of women as seen in the famous Tiffany window in Linsly-Chittenden Hall and in the Alma Mater above the library circulation desk.