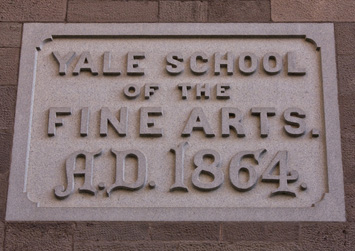 Looking at this building, even understanding from the inscription that it was built in 1864 and housed the first School of the Fine Arts, we would have no way of knowing that it also welcomed the first registered female students onto Yale campus in 1869 when that school opened—which makes 2019 not only the 50th anniversary of undergraduate coeducation but also the 150th anniversary of female Yalies.

Caroline Leffingwell Street and her husband Augustus Street (she the daughter of a member of the class of 1786, he of the class of 1812), the donors of Street Hall, stipulated that it would be open to both sexes—both as an art gallery and as one of the country’s first Schools of the Fine Arts. They also required that the building have an entrance onto Chapel Street as well as one onto Old Campus in order to accommodate not only the Yale community but also the surrounding area from which the school would receive its male and female students, the lectures would gather an audience, and the art collection would attract spectators. 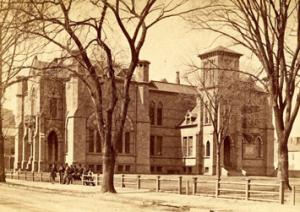 Although Mr. Street died before the completion of the building, Caroline Street urged Yale to open the school quickly. She chose the first Dean, John Ferguson Weir. And she endowed and named the two professorships with which the school opened: the William Leffingwell Professorship of Painting and Design, named after her father, and the Street Professorship of Drawing, named in such a way as to suggest not only Caroline and her husband, but possibly also the Street daughters, all of whom had died years before. 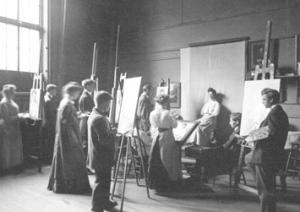 What was it about the 1860s and the 1960s that resulted in such seismic changes for women at Yale? One answer might be found in a poem marking the 1864 Cornerstone Ceremony for Street Hall. New Haven resident Julina N. Bail contributed her poem on the marriage of Art and Science during the time of national turmoil that was the Civil War: “A graceful Temple riseth here; / A Hall of Science standeth near.” In this poem, Bail positions a Yale swelling with new growth and generous donors as the result of a heaven-blessed fight for freedom, a freedom which would include education for women.

Although the building stands on the same block as the rest of what has come to be known as “Old Campus,” the male undergraduate population at the time professed not to notice it—or its female students, who would have been using the street entrance. In the early years, the students at this school lived an isolated existence on campus: relegated to this corner and kept in this building.