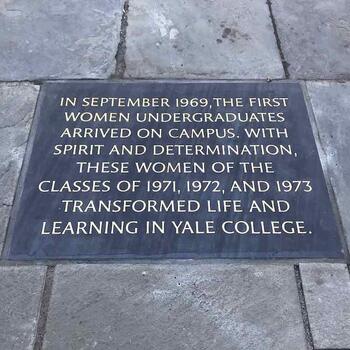 “In September 1969, the first women undergraduates arrived on campus. With spirit and determination, these women of the classes of 1971, 1972, and 1973 transformed life and learning in Yale College.” Those first women returned in September 2019 to celebrate 50 years of coeducation and dedicate the threshold stone, just inside the Phelps Gate entrance to Old Campus. The series of weekend events, including tours and talks, film events, dedications, and informal gatherings, gave Yale alumnae—many of whom had never chosen to return to Yale before—the opportunity to reflect on the meaning of coeducation for the 575 First Women and for subsequent generations of students.

Addressing the alumnae in attendance, President Peter Salovey said: “This is not far from the spot where the first building of the Collegiate School, now called Yale, was raised over 300 years ago. In this place, rich with Yale history, we remember that every barrier broken is both an end and a beginning.” Elizabeth Alexander (BA 1984), celebrated poet and president of the Andrew W. Mellon Foundation, also spoke, saying: “We belong to an evolving entity that believes in the strong spine of certain traditions but also evolution. Yale has changed; you have helped change it; it will continue to change.”