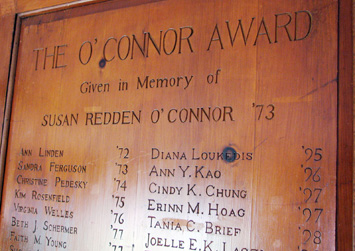 In the South Common Room at Timothy Dwight hangs a plaque with the names of the female-only recipients of the O’Connor Award, named in honor of Susan Redden O’Connor.

After graduating with the top of her class from a private New York high school, O’Connor entered Yale in 1969 with the first freshwomen. At Yale, she played varsity tennis, sang with the Glee Club, and rigorously pursued a pre-med track. The summer after her sophomore year, while working as a counselor at a tennis camp in New Hampshire, she died in a cabin fire. Her parents dedicated the O’Connor Award, to be given each year to a senior who exhibits the “eager, generous, joyful spirit” that their daughter embodied. Later, O’Connor’s two sisters became Yalies and one even went on to medical school, fulfilling her older sister’s dream.

(Photograph by the Women Faculty Forum.)