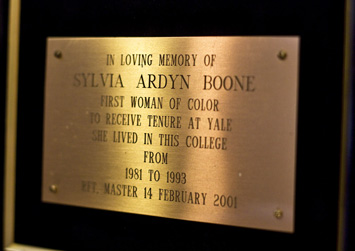 In the South Common Room of Timothy Dwight College hangs a plaque celebrating Professor Sylvia Ardyn Boone (Ph.D 1979). The plaque reads: In Loving Memory of Sylvia Ardyn Boone. First Woman of Color to Receive Tenure at Yale. She Lived in this College from 1981 to 1993.

Boone’s relationship with Yale began in the fall of 1970, when a group of TD students led by Vera Wells (BA 1971) invited the noted scholar to teach a residential college seminar titled The Black Woman, which covered women from Nefertiti to Rosa Parks. As Wells has stated: “While this may not seem unusual today, it was truly innovative at the time.” The seminar proved so successful that Boone and Wells teamed up that fall to organize the Chubb Conference on the Black Woman. 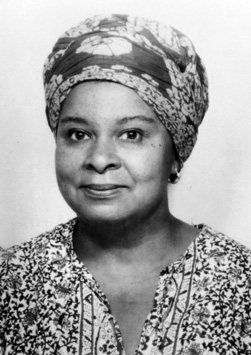 Wells writes: “With no more than ninety black women in the entire Yale community, over three hundred attendees packed Davies Auditorium” to hear such speakers as Maya Angelou and Shirley Graham DuBois.

Boone earned her doctorate in the History of Art at Yale in 1979, and immediately joined the faculty in the History of Art and Afro-American Studies. A decade later, in 1988, she became the first woman of color to earn tenure at Yale. (Since then, only a few other Black women have earned tenure at Yale). Since Boone’s death, Wells has endowed both a graduate prize and an undergraduate scholarship in her name, ensuring that the name of Sylvia Ardyn Boone will continue to inspire young scholars as it inspired the young Wells. 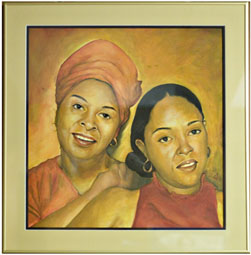