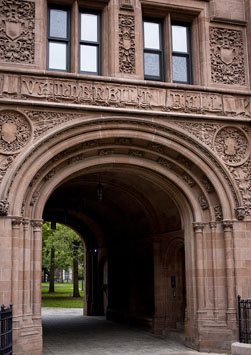 Historically, bathrooms have been a major obstacle to coeducation. The Medical School finally admitted women in 1916 after applicant Louise Farnam’s father offered to pay for the women’s restroom. In 1970, women at the Divinity School occupied the only bathroom—which was allocated to men—in the stacks of the Divinity School Library until the Dean appeared with an agreement that declared the restroom gender neutral.

When Vanderbilt Hall was chosen to house the first class of freshwomen, long debates were held as to what changes needed to be made. The landscape on Chapel Street was redesigned to shield the women from view and a glass office was built into the archway to house a 24 hour security guard—you can still see the tracks where the walls were fitted. Eve Rice and Joan O’Meara Winant, residents of Vanderbilt that first year, explain that although the university installed curtains in the bedrooms, the students had to make the curtains for the common rooms—because the men in the residence hall across the way were caught using binoculars to watch their female classmates. 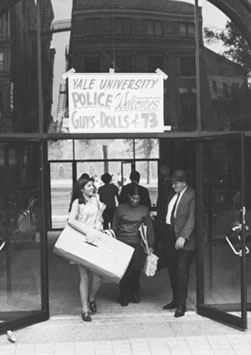 But the bathrooms received the most attention: not only were they repainted, the lighting was upgraded and shelves and mirrors were added. Elga Wasserman (JD 1976), then Special Assistant to the President on the Education of Women, later stated: “What I think was very obvious is that the men were imposing their ideas of what women needed and there was very little ability to listen to women students. I mean after all there were women students in the graduate school and in the law school. The first thing I did when the women were here was to have a regular meeting with representatives from all of the colleges just to find out what it is they cared about and it didn’t turn out to be full length mirrors.”

Today, Vanderbilt, the other Old Campus dorms, and the residential colleges all house just-about-equal populations of females and males. Extra security measures continue to be observed for the women, such as the stipulation that every first floor of Old Campus be occupied by male students.