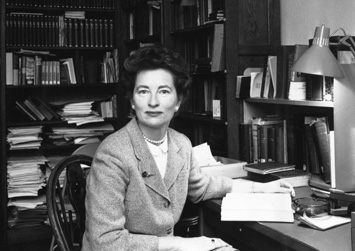 The Women Faculty Forum (WFF) emerged during Yale’s tercentennial celebrations as the result of a campus-wide collaboration to highlight the presence of female faculty at the university. Pictured here, Marie Borroff was the second woman to be tenured in the Faculty of Arts and Sciences (1965) and the first to be named Sterling Professor (1991). But women came onto the faculty at Yale at least as early as 1905, when Florence Bingham Kinne became the first female instructor at Yale; her title in the Pathology Department was Assistant in Instruction. About ten years later, the Biology Department hired Yale’s first female Lecturer, Anna Maria Rhoda Erdmann. In 1920, Elementary Education appointed Catherine Turner Bryce the first woman Assistant Professor. When the Yale School of Nursing was established in 1923, Annie Goodrich became Yale’s first female dean. In the 1950s, Bessie Lee Gambrill from the Department of Education was the first woman granted tenure and Clabaugh Wright was the first woman tenured in the Faculty of Arts and Sciences. In 1970, Anne Coffin Hanson was the first female to be hired as a full professor at Yale. In 1974, she was appointed chairman—the title she preferred—of the Department of the History of Art, making her the first woman to head a department at Yale.

As of 2019-2020, 664 tenured professors were male and 245 were female. The WFF continues to work in conjunction with faculty, students, and interested alumni/ae to foster gender equity throughout the university, to promote scholarship on gender and scholarship about and by women, and to promote mentoring, collaboration, and networking.