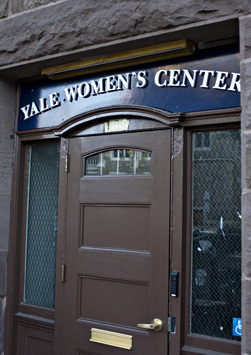 In 1980, when the Women’s Center moved into its very own three rooms in the basement of Durfee Hall, the occupants celebrated the official new home and the added security of the central location, proclaiming: “The Women’s Place is in the CENTER!” They planned a feminist library, an emergency hotline service, and a film series. Over the years, the number of women’s groups in residence has ranged anywhere from 6 to 25, including Latina Perspectives, the Yalesbians, Aurora (a feminist magazine), PRISM (gay, lesbian, bisexual people of color), Yale Men Against Rape, the Yale Belly Dance Society, Yalies Against Breast Cancer, the Male Feminist Network, and an all-female comedy group, the Sphincter Troupe.

Before—and even after—the Yale Center opened, students frequented the New Haven Women’s Liberation Center. Before the mid-1970s, when it moved into an old house on Orange Street, the New Haven Center occupied two Yale-allocated spaces: the basement of 211 Park Street, and, perhaps not coincidentally, here at 198 Elm. A group of New Haven women remembers working side by side with Yale students to provide free counseling, abortion referral, and consciousness-raising groups. According to them, there was a lot of back and forth between Yale activities and New Haven activities at the time.

The Yale Women’s Center has been instrumental in making visible sexual harassment on campus. A different kind of legacy has been at work here as the most recent occupants continue to work toward ends first defined, in at least one case literally, by their mothers. In 1977, then undergraduate Ann Olivarius (BA 1977, JD 1986, MBA 1986) was part of a lawsuit (Alexander vs. Yale) in which a number of students accused professors of sexual harassment. Thirty years later, after a Yale fraternity staged a misogynist act in front of the Center, Ann Olivarius’s daughters, Chase Olivarius-McAllister (BA 2010) and Kathryn Olivarius (BA 2011), were part of the discussion that led the Center to initiate legal action and to reassess the security of their physical location on campus—a location which, in recent years, has been described as “a dump, tucked behind a row of dumpsters.”

Since then, the space has been refurnished and repainted. In addition, a professor now serves as advisor between the Center and the Dean’s office, which hearkens back to the late 1970s when Assistant Dean Judith Brandenburg, known to students as the Dean of Women, helped establish the Yale Women’s Center.

‹ Yale School of Nursing up