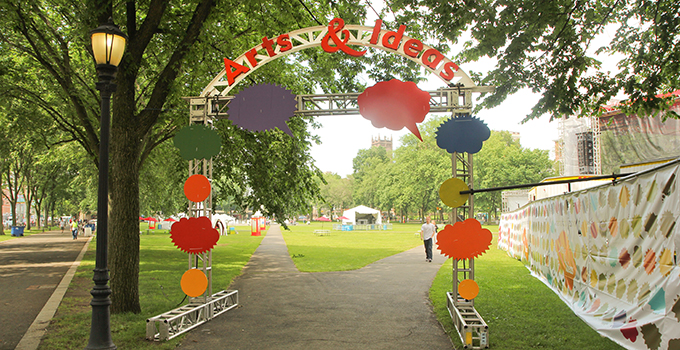 New Haven has experienced—and continues to enjoy—a renaissance. Within an easy stroll from the New Haven Green are more than 100 distinctive restaurants, offering something for every palate. The city abounds with theaters, museums, and shopping destinations to satisfy all interests and tastes. The International Festival of Arts and Ideas, Free Concerts on the Green, the New Haven Jazz Festival, and the Connecticut Open Tennis tournament are but a few of the major events and festivals that regularly bring thousands of visitors to the city.

Following are some of the highlights of New Haven’s dynamic dining, arts, and shopping opportunities. Visit the Info New Haven website for a complete list of events, shops, and restaurants.

But that’s not to say the old favorites are gone. Indeed, the venerable Louis’ Lunch –self-proclaimed home of America’s first hamburger– and Frank Pepe’s Pizzeria, which claims to have served the first –and many argue the best– American pizza, still draw crowds.

The Shubert, Long Wharf, and Yale Repertory Theaters are renowned for groundbreaking-and often career-making-performances. And a collection of smaller theaters and troupes, including Elm Shakespeare and Yale Cabaret, offer both traditional and cutting-edge performances throughout the year.

Yale contributes to New Haven’s cultural diversity with the Yale University Art Gallery, Yale Center for British Art, and Peabody Museum of Natural History, among others. The city’s Knights of Columbus Museum is a great place to learn about the history of religious art. From the trendy Artspace, which features contemporary art, to the Freedom Schooner Amistad on Long Wharf Pier, the city is abundant with cultural opportunities.

New Haven’s main shopping areas include the Broadway District, the Chapel Street Historic District, and the Whitney-Audubon Retail & Arts District. You will find national retailers like the Yale Bookstore by Barnes and Noble, Urban Outfitters, J. Crew, L’Occitane En Provence and Connecticut’s only Barbour alongside local retailers such as Idiom, Raggs Fashions for Men and Women, and Patagonia. Please visit the Shops at Yale for more information.